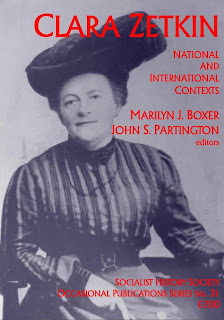 Clara Zetkin was once a renowned figure in the international working class movement; as a Marxist activist and theoretician she became an inspiration for men and women in their struggle against the dual enemies of imperialist war and capitalist oppression. She was dedicated to the Socialist cause and active throughout her adult life in the German Social Democratic Party, the Spartacist League and the German Communist Party. Zetkin was the comrade and friend of Rosa Luxemburg, Alexandra Kollontai and Lenin, but her memory has been eclipsed in recent decades. The founder of the Socialist Women's International but a fierce critic of what she saw as the shortcomings of bourgeois feminism, Zetkin interviewed Lenin on ‘The Woman Question’ and it was Zetkin who over a hundred years ago initiated the first ever International Women’s Day that continues to be celebrated to this day. So why is she now so little known in the English-speaking world? What is her abiding legacy and is there anything that can be learned from her career and example eighty years after her death? The contributors to this special SHS Occasional Publication devoted to Clara Zetkin seek to provide answers to these and other questions for a modern audience.

List of Abbreviations
'Clara Zetkin in Retrospect: An Introduction', by Marilyn J. Boxer