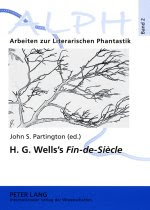 The essays contained in this collection focus on the early H. G. Wells, the scientific romancer, the comic novelist and the young author discovering the literary élite. Written at the crossroads of a new century, the authors of these essays use their own fin-de-siècle experiences to look back one hundred years and critically assess the writings of an earlier fin-de-siècle. With seven chapters dealing with The Time Machine, The Wheels of Chance, The Island of Doctor Moreau, The War of the Worlds, Tono-Bungay and The History of Mr Polly, readers receive a detailed overview of Wells's literary output between 1895 and 1910. Two further chapters treat Wells's literary friendships, assessing his personal and professional relationships with the Victorian realist, George Gissing, and the pioneering modernist, Joseph Conrad, while the final chapter reveals Wells as a 'time traveller', employing poststructuralist techniques fifty years before that expression was coined. http://www.peterlang.com/index.cfm?vSiteName=PDFResult.cfm&vItem=57111&vLang=E
***
Table of Contents
Posted by Dr John S. Partington at 23:10